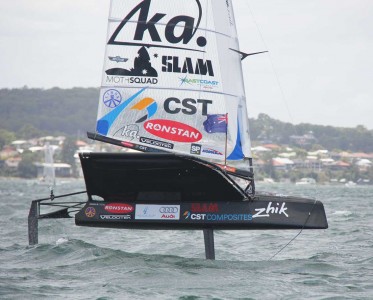 Nine national and one world championship wins for CST product has been a result of our strong focus on R&D and a close working relationship with some of the leading sailors in their respective classes.

Our congratulation goes to the crew of “Brydens Compensation Lawyers” who bounced back to win the windy 16ft Skiff Nationals sailed from Royal Queensland Yacht Squadron. The team skippered by Lee Knapton used CST’s new carbon fibre rectangular boom, spinnaker pole and fibreglass mast tips in both no1 and no2 rigs.

Current I14 world champions Archie Massey and Dan Wilsdon convincingly won the Australian I14 Championship with a string of first places. They too used the new rectangular boom and a modified configuration HM3 CST mast.

Rohan Nosworthy and crew Neil Tasker dominated the MG14 nationals with the lowest possible score of 7, after scoring a 1st place finish in every heat. They used the newly developed high modulus elliptical mast as did last year’s winner Hugh Tait, who placed 2nd.

Trevor Fay and Nathan Chipchase once again won the Cherub nationals with the CST HM one piece mast while the B14 National Championship was won by current world champions Guy Bancroft and David Grace.

Peter V. made a comeback to the NS14 class winning the Australian Championship with Tina Babbage while Nick Craig won the Phantom class in the UK.

Nathan Outteridge was also victorious walking away with the Australian Moth Championship, sailed as a warm up event before the Worlds. He then marched on to win the World Championship as well, sailed in a strong fleet of 113 boats. In fact this was undoubtedly the best quality fleet the Moth class has ever seen. Comprising of a number of World and Olympic champions as well as celebrated Americas Cup and Volvo Ocean Race sailors.

During the past few months CST Composites worked extremely closely with Nathan to develop a range of new masts specifically designed to suit the KA and MSL10 and MSL13 sails. No less that 21 prototype masts were made for the CST Moth Team, refining the bend characteristics to perfection in order to achieve the optimum luff curve match. Nathan also used the new CST rectangular boom which has proven to be stiffer and lighter than last season’s model.

All of the above products will be available as the part of our new 2011 range in the coming weeks.