Since the idea was conceived, the Contender Class has always been the pinnacle in sailing. Drawn up by one of sailings most famed designers, Ben Lexcen, the International Contender was just that: a possible successor to the Finn dinghy for the Olympics.

Designed by a world class naval architect for a world class competition, the International Contender is still very much a world class boat. This will be proven once again during the 2014 CST Composites Contender World Championships.

The Belmont location just north of Sydney, has held National and World championships from nearly every class over the years, and now, one more will be added to the list. Running from January 19th to 25th, the regatta will present the cream of the international crop and include a large number of entrants sporting the latest CST Composites gear. 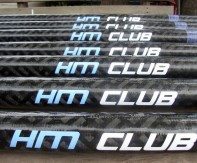 Over the years, CST Composites has been dedicated to providing the highest quality products to the contender class. Our rectangular booms are made from continuous winding of a single piece of carbon fibre which eliminates any seams or messy overlaps, whilst keeping the stiffness uniform and compliant to the design specifications. Not to mention giving the spars our iconic and unique look.

The same process is applied to our one-piece Contender masts. With no joins or sleeves, the mast leaves the factory with the exact bend and stiffness characteristics as designed. Not to mention being lighter than the two piece alternative.

With the 2014 World Championships just around the corner, CST Composites is proud to be a major sponsor and wishes the best of luck to all competitors. 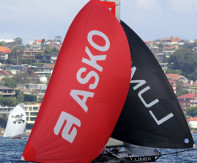 CST Composites continue to ratchet up the victories in the I14 class with Brad Devine and Ian Furlong recently taking out the 2013-2014 Australian National Championships with our spars. This makes it 5 wins for Brad and Ian in the National Championships and a further 4 World Titles in a row. It seems that an International 14’ Skiff powered by CST Composites is almost untouchable!

In this year’s Australian Nationals, not only did CST Composites help the winning boat achieve the ultimate victory, but of the top 10 boats in the fleet, 7 of them sported gear from CST Composites.

So why is our gear so popular? Why does our gear keep winning? CST Composites exerts every effort when designing and innovating in order to conceive a spar that can be married to a suit of sails with maximum efficiency.

This fastidious approach to every step of a project from start to finish is what sets CST Composites apart from the rest. It means that we can produce spars that are stiffer, more durable, lighter and optimised to provide the best profile to design a sail to.

Our latest rectangular booms have been adopted by the fleet faster than almost any other class. Already the stiffest booms in the market, our latest model sports laminated vang attachments and glue-on fittings has eliminated the need to drill holes or bolt anything to our booms, thus keeping them even stiffer! With no room for compromise in such a highly competitive fleet, the innovative spirit that has kept the I14 such a strong class links perfectly to the enthusiasm and passion that keeps CST Composites at the forefront of design. 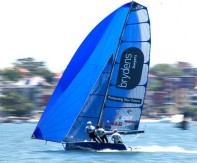