Another impressive victory to add to the CST accolades came from the Brydens 16’ Skiff Sailing Team as they took out the 2013/2014 State Championships earlier this year. Lee Knapton, Peter Mackie and Ricky Bridge sailed a brilliant series and are full of praise for their CST Composites spars. 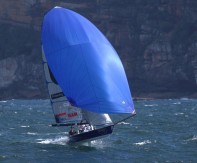 “The masts aesthetically looks superior, with the new spreaders, clear coat finish and glued on fittings. We are really happy with the way the masts set up in the boat with both #1 and #2 rigs demonstrating very similar bend profiles” – Ricky Bridge

The 16’ skiff class is a class draped in history and with a set of rules stricter than almost any other skiff class in the world, the 16’s have managed to preserve an incredibly high level of competition where other classes may have struggled.

With the 16’ skiff class making the move to carbon spars only recently, there has been a lot of scrutiny on the new developments and CST Composites is proud to be leading the fleet and setting the bar high for any other competitors (sailors or manufacturers!) who wish to compete within the fabled and historic class of 16’ skiffs!